Kitsune anime is a subgenre popularized by the famous nine-tailed fox in Japanese folklore. Given the mystery surrounding its supernatural existence, aesthetically pleasing character designs and otherworldly personalities in pop culture, many are drawn to this mystical being that can shift between human and fox. If you’re a fan of the nine-tailed fox, here are five great kitsune anime starring the popular yōkai. 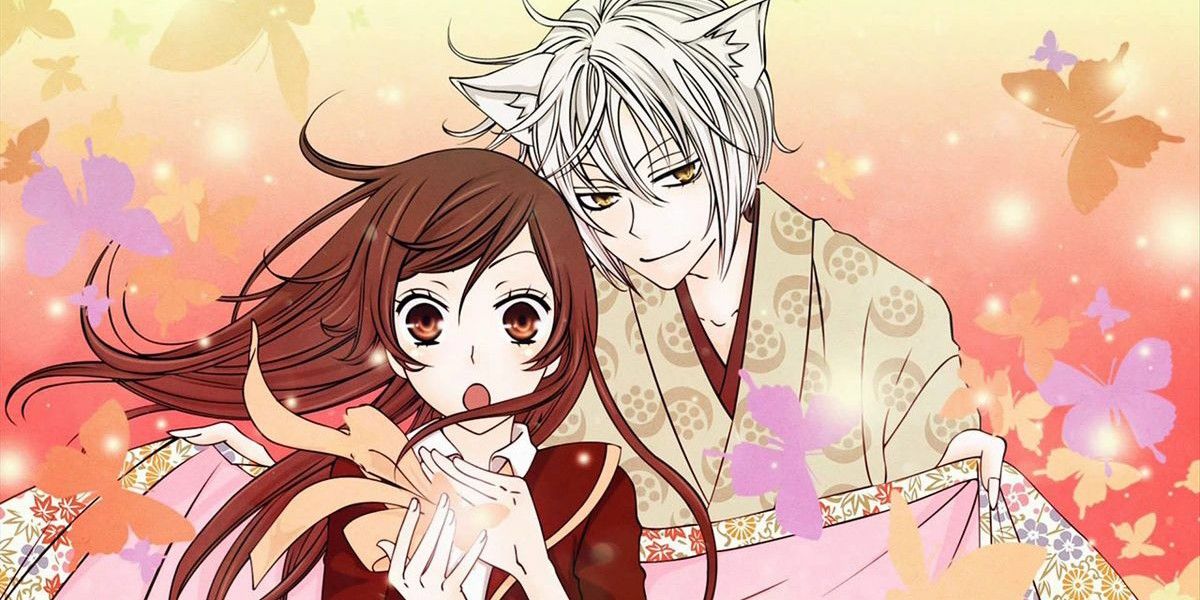 Kamisama Kiss stars the broke and homeless Nanami, who’s suddenly approached by a mysterious man named Mikage. He offers her a place to live and she quickly accepts, not realizing the implications behind the offer. Mikage is the Earth Deity of Mikage shrine and he transfers his godly role to Nanami after she takes up residency there. Not only does she suddenly become the shrine’s land god, but she inherits a temperamental fox yōkai named Tomoe as her familiar. While he’s several hundred years old, he appears to be a young adult who cuts his hair to blend in better with humans. As an exceptionally powerful supernatural being, Tomoe wields rare fox-fire and can easily defeat most yōkai in the supernatural world.

As a kitsune yōkai with abandonment issues, Tomoe doesn’t trust Nanami and actively tries to make her life difficult so she’ll leave the shrine. He initially refuses to become her familiar and escapes to the supernatural world to partake in lazy debauchery while leaving Nanami to fend for herself. However, Nanami is grateful to finally have a home and takes her new godly duties very seriously. As Kamisama Kiss continues, Tomoe’s wild and defiant personality lessens as he learns to respect Nanami and agrees to become her protective fox familiar.

Soushi Miketsukami is a nine-tailed fox spirit starring in Inu x Boku SS. Members of the SS are born of human and yōkai descent, and Soushi is the most powerful SS agent of all. As a noble kitsune, he decides to serve and protect Ririchiyo Shirakiin who lives alone in Ayakashi Kan. Soushi is a loyal and protective fox spirit who puts his life at risk for Ririchiyo without hesitation. Ririchiyo also has a yōkai form where she grows horns and summons ancient weapons.

Once raised in a loveless household with no feelings of self-identity or self-worth, Soushi uses his good looks to gain the favor of older women who aid him until he could leave. Despite his unusual hair and eye color, he blends in well with humans by hiding his ears and tails while donning an all-black suit for everyday wear as an agent. He transforms into his full nine-tails form once a threat’s detected, increasing his power and speed. Soushi can be cunning and possessive while wielding incredible power as a kitsune yōkai, but he has a calm and loving disposition when he’s not provoked. 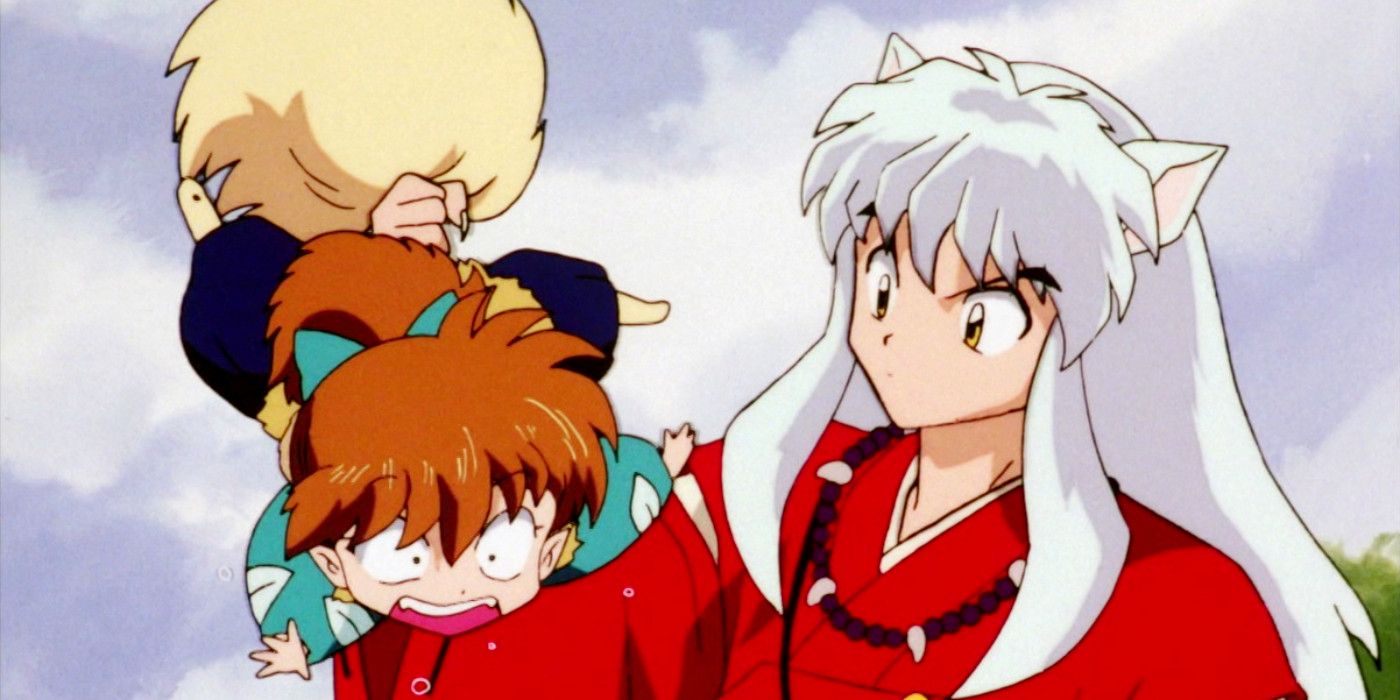 Inuyasha has everything a kitsune or yōkai fan could ask for. In a feudal era full of demons and half-demons, there are yōkai spirits of every type in this famous anime. While Inuyasha possesses the physical attributes of a typical kitsune character with his white hair and ears, he’s actually born of The Great Dog Demon and not a fox spirit. This contradiction may confuse fans who initially assume Inuyasha is a kitsune yōkai.

While Inuyasha himself may not be related to the famous fox spirit, his travel companion is. Shippō is a young kitsune whose father, a great fox demon, died right in front of him. Despite wanting to avenge his father, Shippō is too young and powerless to achieve this on his own. He soon runs into Kagome and Inuyasha and joins them on their journey to find the Shikon Jewel shards. Like the nine-tailed fox he’s based on, Shippō possesses fox magic that makes him a master of tricks and deception. 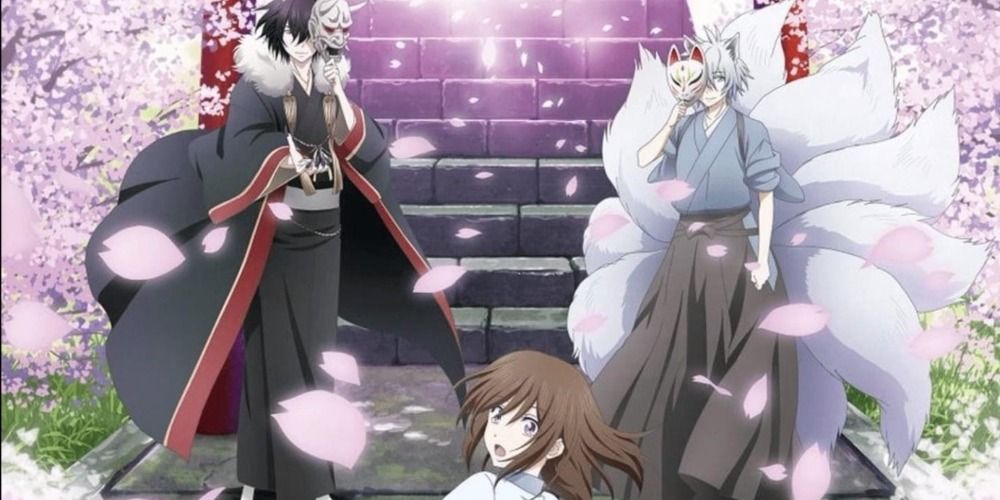 Kakuriyo: Bed & Breakfast for Spirits stars Aoi Tsubaki, a college student who inherits the ability to see yōkai from her grandmother. She soon stumbles upon an Ogre at Torii shrine and feeds him because he claims to be hungry. However, the Ogre yōkai takes Aoi to the Hidden Realm and says she must marry him to make up for her grandmother’s debt. Fortunately, she bargains with him and he agrees to let her work at his inn to pay him back instead.

While working at the Tenjin-ya bed and breakfast in the Hidden Realm, Aoi meets several other spirits including a kitsune yōkai named Ginji. Ginji is the young master of the inn and, like many anime kitsune, he has white hair, blue eyes, and white fox ears. His nine white tails aren’t always visible and he possesses a white fox mask to match his spirit. As a nine-tailed fox, he can transform into several versions of himself including a child, woman, a baby fox, and a full-grown fox. While Ginji is kind and cheerful toward Aoi, many in Kakuriyo view him as a manipulative and clever kitsune yōkai.

As one of the anime world’s largest and most successful franchises, many don’t immediately view Naruto as a kitsune anime. However, the Nine-Tailed Beast living inside of Naruto is the series’ main premise from start to finish. Kurama is based on the nine-tailed fox of Japanese legend, making him incredibly powerful and temperamental. As the strongest of the nine Tailed Beasts, Kurama’s sealed away in Naruto immediately following his birth in order to protect the Hidden Leaf. Naruto becomes the Nine-Tails’ jinchūriki in his mother’s place, which will change the course of his life forever.

Naruto spends his early childhood being bullied and avoided by the villagers of the Hidden Leaf who view him as a monster due to the demonic kitsune spirit living inside him. He’s originally unaware of the inner spirit as he struggles to contain and withstand the Nine-Tails’ overwhelming chakra. When Kurama’s chakra leaks out of Naruto, a demonic cloak forms that take on the shape and tails of the nine-tailed fox. Jiraiya helps Naruto suppress and control Kurama’s chakra and use it to enhance his own abilities. As Naruto and the Nine-Tails struggle for control and learn to accept one another, Naruto may be the most popular kitsune anime to date.